South Carolina law recognizes breach of contract as a valid legal claim creating liability for the breaching party and damages for the non-breaching party. Before there can be a breach, ho 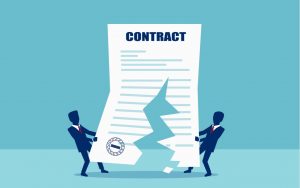 wever, a party must establish a valid contract. A contract is created when there has been an offer identifying a “bargained for exchange,” acceptance of that offer, and an exchange or promise to exchange valuable consideration. Sauner v. Public Serv. Auth. of S.C., 581 S.E.2d 161, 166 (S.C. 2003). Once a contract has been created, both parties are bound by their duties thereunder.

Sometimes, however, a party stops performing his or her duties under the contract. He or she may communicate to the other party a desire to stop performing some or all duties or may simply stop performing all together. This is considered a breach of the contract. There can be many reasons for breach, including a disagreement between the parties or external circumstances that interfere with a party’s ability to perform.

The question, then, is what to do when one party stops performing. The first step is to look for an answer in the contract itself—did the parties agree to what happens in this situation? For example, if the non-performance is caused by some external factor out of the parties’ control making it more difficult than anticipated to perform, the contract may include a provision excusing a parties’ non-performance.

After the first two steps are taken, there are many options for the non-breaching party, including modifying the contract and continuing with the relationship, allowing the breaching party to cure, or treating the contract as terminated or rescinded. If a party is in breach, the non-breaching party is generally entitled to all damages that are the “direct and proximate result of” the breach.  Fung Lin Wah Enterprises Ltd. v. East Bar Import Co., 465 F. Supp. 2d 536, 542 (D.S.C. 2006). It is important to remember that in every contract under South Carolina law, there is an “implied covenant of good faith and fair dealing.” Commercial Credit Corp. v. Nelson Motors, Inc., 147 S.E.2d 481, 484 (S.C. 1966).  Thus, all parties have a duty to act in good faith in performing or trying to perform each duty under the contract even if there is a concern with the other party’s performance.

Hamil Little is experienced in contract matters, including drafting contracts and litigating breach of contract disputes.  If you would like to discuss your options or have questions about this post, contact us at (404) 685-1662 (Atlanta) or (706) 722-7886 (Augusta), or by email, info@hamillittle.com. You may also learn more about our law firm by visiting www.hamillittle.com.