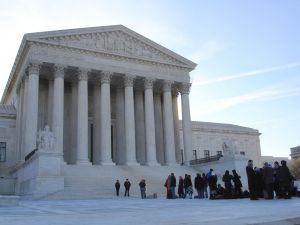 Justice John Roberts issued the majority opinion, stating: “Congress passed the Affordable Care Act to improve health insurance markets, not to destroy them. If at all possible, we must interpret the Act in a way that is consistent with the former, and avoids the latter.”

Plaintiffs in the King case had argued that the language of the ACA allows for certain subsidies only as to state-established exchanges, but not as to federally-established exchanges. This premise challenged the Internal Revenue Service interpretation that U.S. Treasury regulation 26 C.F.R. § 1.36B provides for tax subsidies as to both federal- and state-established health insurance exchanges, not just exchanges established by the states. The Plaintiffs’ rationale was that their more narrow interpretation of the ACA revealed Congressional intent in establishing tax subsidies as incentives for states to benefit their citizens by creating health exchanges.

Georgia is among the majority of states using a federally-facilitated marketplace, or a health exchange managed by the U.S. Department of Health and Human Services, in which consumers apply for and enroll in coverage directly through the federal website healthcare.gov. According to a recent article in the Atlanta Journal-Constitution, “Roughly 541,000 Georgians enrolled in Affordable Care Act health plans for 2015. More than half are new to the online marketplace and nine in 10 qualify for federal tax credits to help lower their monthly payments.”

Had the Supreme Court ruled in the King case that the ACA does not provide for subsidies to be used to supplement health coverage in states which have not established health insurance exchanges, millions of Americans, including more than 500,000 Georgians, stood to lose health benefits. Such an outcome would have severely undermined the economic structure of the ACA. In that event, Congress would have needed to act swiftly to preserve financial assistance, a difficult proposition in today’s political climate. Congressional Democrats and Republicans were braced for a ruling for Plaintiffs in the King case. Representatives from both parties had generated proposals to mitigate the damage of a ruling that could stop the flow of funds to consumers receiving assistance. Leaders from both parties expressed intentions to arrange for short-term subsidies for consumers enrolled in the federal exchange.

Of course, consumers are not the only ones impacted by the Supreme Court decision affecting ACA subsidies. Healthcare providers, including hospitals across the national that are dependent on income from patients enrolled in the federal exchanges stood to lose millions of dollars had the High Court ruled against the subsidies. Justice Roberts emphasized the significance of the financial impact of the tax subsidy provision of the ACA in his opinion in King: “The tax credits are among the Act’s key reforms, involving billions of dollars in spending each year and affecting the price of health insurance for millions of people.” The full opinion is available at CNN: http://www.cnn.com/2015/06/25/politics/scotus-opinion-document-aca-subsidies/index.html

If you have questions about this post, contact our Georgia business and healthcare law firm today for additional information.