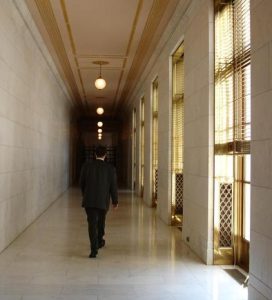 So much focus is placed on the federal “whistleblower” statute, the Federal False Claims Act, that similar acts, such as various States’ versions of the law, are often not as well known.  All have a common thread: they are a tool to recover tax payer money lost to fraudulent acts and serve to deter such fraud. Georgia has two false claims act statutes designed to combat fraud and abuse in Georgia.

A brief history of this area of law puts the modern Federal and Georgia False Claims Acts in proper light.  The Federal False Claims Act was passed during the Civil War era in response to fraud by government contractors who seized the opportunity of intense government spending on the war to defraud the government.  An essential concept undergirding the earliest versions of the law was to create a financial incentive for one dishonest contractor — a “relator” — to turn in another.  Hence the original law (1863) provided that the relator could be paid up to one-half of the government’s recovery in a false claims act case.  The original law survived for decades as a remedial statute designed as a means for the Federal Government to recover what were thought to be, without the law, unrecoverable substantial losses for the treasury that attended dishonest acts. As one court explained:

The statute is a remedial one. It is intended to protect the treasury against the hungry and unscrupulous host that encompasses it on every side, and should be construed accordingly.  It was passed upon the theory, based on experience as old as modern civilization that one of the least expensive and most effective means of preventing frauds on the treasury is to make the perpetrators of them liable to actions by private person acting, if you please, under the strong stimulus of personal ill will or the hope of gain.  Prosecutions conducted by such means compare with the ordinary methods as the enterprising privateer does to the slow going public vessel. United States v. Griswold, 24 F. 361, 365-66 (D. Or. 1885).

Over ensuing decades, and through the two World Wars, the Federal False Claims Act developed through some changes by Courts and Congress.  Then, in 1986, very significant amendments established the FCA in its modern form and breathed new life into the statute.  The 1986 Amendments, signed by President Ronald Reagan, enhanced incentives for FCA cases to be brought by “qui tam“ relators on behalf of the government.  Damages recoverable by the government were increased to treble damages and monetary penalties were increased to a minimum of $5000 and a maximum of $10,000 per false claim.  The qui tam relator’s financial incentive was increased as well, to a range of 15% to 25% (where the government intervenes) or 25% to 30% (where the government does not intervene).  The 1986 amendments have facilitated the Federal government’s recovery of billions of dollars lost to fraud.

Through the Deficit Reduction Act of 2005, Congress created financial incentives for States to enact their own false claims act statues to combat fraud and abuse.  In 2007, Georgia passed the State False Medicaid Claims Act, O.G.G.A. §§ 49-4-168 to 49-4-168.6.  This law, which is like the FCA, protects Medicaid spending.  In 2012, Georgia passed the Georgia Taxpayer Protection False Claims Act, which extends the protection of taxpayers beyond Medicaid, to all other spending by Georgia and local governments.  The new law considerably enlarged the Georgia Attorney General’s ability to bring Georgia False Claims Act cases.  Additionally, like the Federal FCA, cases under Georgia’s False Claims Acts can be brought by private citizens with knowledge of fraud, which are known as “qui tam” cases.

In light of the strong enticement for bringing FCA cases and the potentially draconian financial consequences of an FCA investigation or case, medical practices, hospitals and other healthcare businesses that receive third party reimbursement should be prudent to institute good policies and procedures that will serve to detect and root out any fraud and abuse in their businesses and to keep such policies current and up to date.